Translated, ‘Spiti‘ means the ‘middle country‘ – a name obviously given as a result of its ties with both lndia and Tibet. With freckles of green over a dry, weather-beaten face, Spiti is a cold desert where the monsoon rain never comes. It is characterized by stark beauty, narrow valleys and high mountains. A century ago, Rudyard Kipling in Kim called Spiti “a world within a world” and a “place where the gods live” – a description that holds true to the present day. The river Spiti that flows with cold snow-melt through the region is formed at the base of the Kunzam range.

It flows eastward to meet the Sutlej at Khab in Kinnaur. En route, it is fed by several streams – Pin, Chiomo, Gyundi, Rahtang, Ulah, Lungze, Mane, Surahl, i-ianze, Tagling, Thumpa Lumpa, Kaza, Lingti, Parechu and Tabo. Spiti’s mountains form a part of the middle and the greater Himalaya and several peaks cross 6000m, while the mean elevation of the area is 4570m. The local people have divided it into four units – ‘sham’, the lower region, ‘Pin’, which lies by the Pin river, ‘bhar’, the middle tract and ‘tud’ the high territories. Kaza, the sub-divisional headquarters of Spiti, is situated on the left bank of the Spiti River. The village is overlooked by steep ridges. Kaza makes an ideal base camp for all treks and tours within the valley. Guides, porters, pack animals and most importantly permits for treks can be obtained in Kaza. Kaza has one of the two Sa- kya- pa sect monasteries. The other monastery is at Hikkim. Opposite Kaza on the right bank of the Spiti river is Kyuling from where the nono of Spiti ruled over his subjects. Rani Damyanti, a descendent of this ruling, family, now resides in Kaza preserving all the stately charm of theyester years. The highest villages in the world which are connected by motorable road are Kibber, Gete, Langza, Hikkim and Comic. 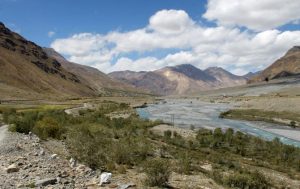 THE SPITI – Deluxe Hotel
(Open June to October)
Named after the Spiti River and complimenting the Spiti valley, the hotel has been started recently. The hotel offers as excellent accommodation for exploring the artistically and culturally rich monasteries around Kaza.